Whirl With Merle - It's A Humorous Life 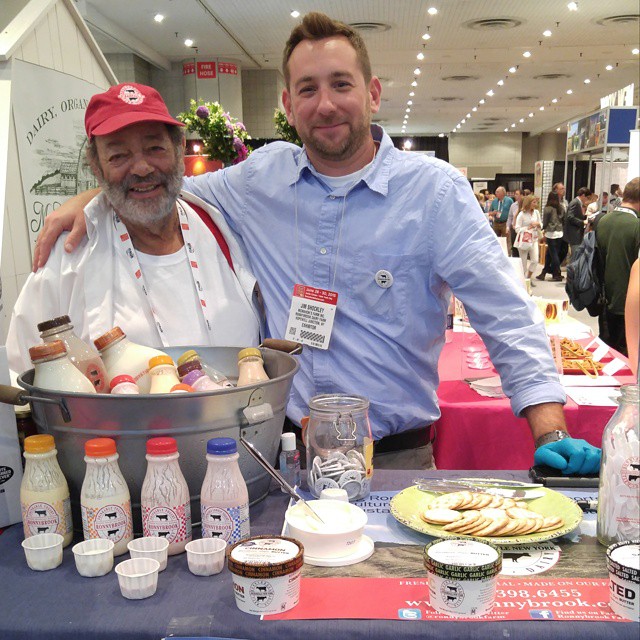 Have A Rice Day! 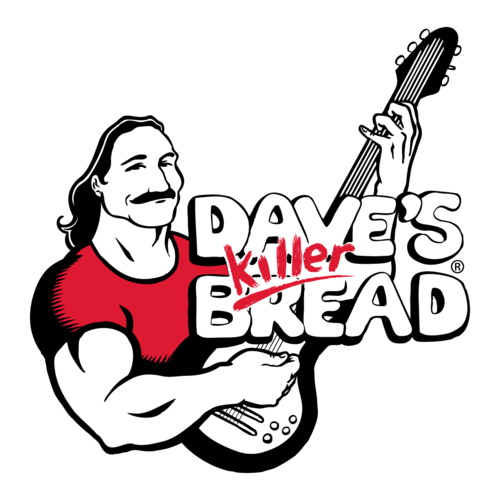 Man Can Live By Bread Alone

At Least We Tried

The Springfield Museums presented The Essence of Nature: Paintings by Marlene T. Yu (Green Movement in Art) in the D’Amour Museum of Fine Arts, beginning February 8, 2020.  Artist Marlene Tseng Yu’s newest artwork, a 36-foot mural had its debut along with a gallery of 19 of her other pieces. 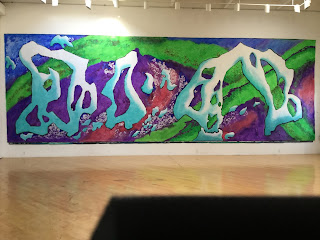 Due to the recent COVID19, the museums had to close.  As of July 13, with advanced tickets encouraged, they reopened to the public with several safety protocols that you can find on their website.  Since Marlene’s exhibit was part of the closure, the museum was able to provide a virtual tour of her artwork.  You can view it at

Hearing brilliant recommendations the staff. Including Curator Maggie North, first viewed Marlene’s distinctive artwork while visiting her studio at the Rainforest Art Foundation located in Long Island City Yu’s own inspiration of the natural world and concern for the effect of  Global Warming, Marlene and her husband, James have established the Foundation with locations in Shreveport, Louisiana and Taiwan. The Rainforest Art Foundation, whose mission is to increase appreciation through art, supports other artists who share her desire to preserve our planet. Still a vital working artist in her 80s, Yu’s career includes over 4000 nature-inspired works across more than thirty-five themed art series.
Marlene T. Yu (Chinese-American, born 1937) has created monumental canvases using energetic brushstrokes and vibrant colors. Born in Taiwan Yu came to the United States in 1963, where she was exposed to Abstract Expressionism. For over fifty years, the artist has combined Eastern and Western traditions to create these immersive abstracts that emphasize both nature’s beauty and power.

“Visiting her studio, we wanted to speak to her about some of the newer pieces as well as those in the past that also pertained to the green movement,” said North. “As a Curator, I am able to provide information about the space which now just about holds the 20 piece exhibition. In choosing the artwork, we also gave suggestions as to what the public tends to enjoy as well as Marlene’s vision that we executed in the gallery.”

“The exhibition really gives you a sense of her work throughout the decades. We have pieces from the 70’s as well as from the past decade. Her murals are quite immersive. They encourage you to step back from the piece and as you are drawn into parts of the composition you are inspired to walk closer, step back again and explore another part by honing into it. Marlene deserves so much credit not only for the amount of thought and time that she’s put into it but how the pieces will look in the gallery. It is not often that we have the artist come to the museum and assist with the installation.”

“The Essence of Nature combines elemental images—earth, air, fire, water, ice, forest—in Yu’s unique ‘multi-dualistic’ style, focusing viewers on both the beauty and the fragility of our natural world,” Smith continued. “The phrase multi-dualism derives from Yu’s revolutionary art style. She illustrates multiple dualities: in her artwork, she mirrors themes in nature, blends physical and emotional subject matter, applies techniques she has developed from her Eastern and Western backgrounds to highlight global concerns, and provides opportunities to appreciate her paintings from different points of view.”

“Marlene Yu’s stunning monumental paintings push the boundaries of expression through vibrant colors and energetic brushstrokes,” said Heather Haskell, Vice President of the Springfield Museums and Director of the Art Museums. “Her unique vision encourages all of us to take a moment to appreciate the natural landscape around us and to work harder to preserve the world’s ecological bounty.”

A pioneer in the environmental green movement in art, in 2001 Yu founded the Rainforest Art Foundation to support other artists who share her desire to preserve Earth. The foundation’s mission is to increase appreciation of nature through art. Still a vital, working artist in her 80s, Yu’s prolific career includes over 4000 nature-inspired works across more than thirty-five themed art series.
“The Springfield Museums are honored to feature Marlene Yu’s monumental and revolutionary art,” said Kay Simpson, President and CEO of the Springfield Museums. “We are eager to share her vision and sensibilities with our visitors and raise awareness of the environmental themes her work illuminates.”

For further information on the exhibit and the four other museums, visit www.springfieldmuseums.org

IF YOU BUILD IT, THEY WILL RELAX

This weekend, PortSide inaugurated the "PortSide Pandemic Pop-Up Park" next to the historic ship MARY A. WHALEN timed to the start of ferry service to Governors Island to Red Hook, Brooklyn “Come enjoy cool sea breezes, views of maritime activity and the Manhattan skyline, run through our sprinkler, and eat your take-out at bistro tables while keeping an eye on your kids zooming around this huge sea of asphalt on bikes and scooters”, said Carolina Salguero, Portside’s Founder and Executive Director.  “Our spot is festooned with ship artifacts and our growing FenceMuseum has quirky Red Hook charm and maritime authenticity, along with our historic ship MARY A. WHALEN bobbing just inches from the table setup.”
What is the Mary A. Whalen? According to the website, “She is an artifact of Ira S. Bushey & Sons, a Red Hook business that ran an innovative shipyard, a fuel terminal, and a fleet of vessels moving fuel (tugs, tankers and barges). The fact that ‘Bushey's’ combined what are usually three separate endeavors makes the firm particularly remarkable - and they excelled in all three.”  Originally, the Mary went ground in the Rockaways. She officially became the bases of operations for PortSide New York in 2006 opening to the public in 2007.”


The PortSide Pandemic Pop-Up Park" also includes balls, frisbees and chalk for kids; fragrant flowering plants; string lights during nighttime; umbrellas, children’s furniture and toys donated by IKEA.  In particular, IKEA had donated large blue standing umbrellas resting above each of the 9 tables. There are a total of 22 chairs.


Salguero has been conducting a nightly live stream of magnificent sunsets that include a panoramic view of Portside. It will be passing its 100th day and can be viewed on www.facebook.com/portsidenewyork.

On Sunday, July 19, the Kings Country Band showed up early evening to serenade the attendees. How did word get out?  Aside from facebook, Salguero walked around the immediate neighborhood and spoke with store owners. Perhaps Dolce Brooklyn, (my favorite gelato store) will be delivering to the tables.

“PortSide connects New Yorkers to the benefits of our waterways and ports”, said Salguero. The pandemic, and conditions unique to Red Hook this summer, mean that it’s even more vital to get our neighbors and all New Yorkers to the waterfront, NYC’s largest open space. This nimble organization has history of creating pop ups, from a Sandy aid center to arts events, so when we saw people seeking outdoor space due to covid19, we added this popup space to our pandemic response work. As Governors Island rolled out their plans for ferries here, we stepped up to help them and connect them to the Red Hook community.”

Councilman Carlos Menchaca has been supportive of this area saying, "It is during crises that we see who truly cares about our communities and is willing to uplift and protect our most vulnerable neighbors. For years, PortSide New York has enriched Red Hook by providing a space for play, arts, and collaboration, while sharpening our pride in its rich history and unique waterfront. In partnering with Governors Island's reopening, PortSide has stepped up to make our City's largest open space even more accessible and affordable. I am never surprised, but always humbled, by PortSide's love for the community."

PortSide thanks corporate in-kind donors IKEA, Chelsea Garden Center, and especially Ports America for providing use of their parking lot. PortSide thanks Molly Malone, Dana Claire, Sue Sardzinski, and Timothy Miller for their gifts in-kind; and we thank the two 4-year olds who donated from their piggy banks.


Red Hook is one of several stops on the NYC Ferry. Red Hook’s Atlantic  Basin Landing is located at Ferry Street and Clinton Wharf.

On Sunday, July 26, the band returned continuing to entertain those who took advantage of the pop-up park. 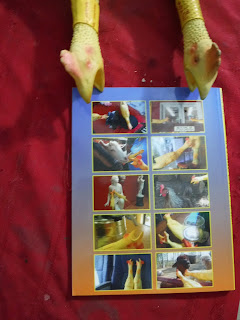 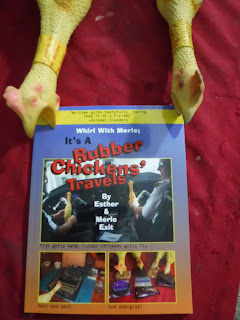 ­­­
Chickens are incapable of flying let alone ones made of rubber which is why two airline pilots placed the chickens behind the steering wheels for hours of lessons.  This resulted in Esther and Eunice, from the Rubber Chicken Forest in Vallecito, California, able to co-author their first travel book, Whirl With Merle, It’s a Rubber Chickens’ Travels.

Over 50 destinations are the focus of this humorous travel classic based upon a blog, “EstherandEuniceadventures.”  that span for more than a decade.  What is special about this work is their target of cities in both the United States and Canada, that are less traveled and deserve a getaway.

In “Meggsachusetts”, as they renamed it, the cities of Quincy, and Provincetown are visited for their important history.  Most people do not know that Provincetown was where the first landing of the Mayflower took place and will be celebrating the 400th Anniversary of the Pilgrim Monument, the tallest granite structure in the US. as a replica of the Mayflower II sails into Provincetown Landing.


Napa Valley may be known for their wineries, but travel the northern area of “Califowlnia” to towns such as Murphys and Grass Valley.  You may head to Folsom for the Johnny Cash legend but did you know that a sake company, Gekkeikan and soy sauce producer Kikkoman, have taken up some major space due to their ability to access the fresh water from the Sierra Mountains?

A slew of wineries are situated in the Finger Lakes of upstate “New Yolk, “ One nearby town of Seneca Falls is not only the setting for the classic movie, “It’s A Wonderful Life”, both the National Women’s Hall of Fame and Women’s Rights National Park are located there as well.

Enjoy the true photography of the front and back covers meeting Esther, Eunice, and their entire family as the forest is actually the location of the Twisted Oak Winery.  Esther encountered Eunice while viewing her “long lost sister” on the side of an egg carton.  They, then decided to adopt a baby (Ethel Mae) at “Chicks ‘R’Us.”  Meeting another two sisters, Marilyn (a kleptomaniac) and Minerva when one trip brought them to a B&B where a couple, who rescues rubber chickens gave a healthier Mildred a better life.

Readers will delve into places such as Bellingham, Washington vs Seattle; Mardi Gras in Shreveport, vs New Orleans; a trek along North Dakota where you can retrace parts of the Lewis & Clark Expedition or loseyour balls golfing from mountain tops ; as well as exprieinceing some lesser known East Coast towns in Maine.

How about an alpaca farm in “New Jeggsey,” and oyster farm in East Dennis?  What is it like to ride in a hot air balloon over wineries?  Go off to Canada for a deep “Da Vinci Code” mystery in Winnipegg and learn the connection between the province of New Brunswick and New Orleans. .


“Written quite tastefully, having read it on a Fry-Day”… Colonel Slanders.  Co-author and journalist Merle Exit is a former comedian-singer-actress (with a list of several other careers). Her first book, “Whirl With Merle – It’s a Humorous Life” published in 2006 has been the number one best seller in her home.

Posted by Merle Exit at 8:54 PM No comments: